Peter Jackson's King Kong: The Official Game of the Movie

When the beautiful Ann Darrow is kidnapped by the inhabitants of Skull Island, Jack and his team must fight their way through the island's prehistoric inhabitants and hostile environments, solving puzzles and fending off attackers, all in search of her. But unfortunately for them, so is a giant ape.
Game Boy Advance PlayStation Portable PlayStation 2 Xbox 360

King Kong is the video-game adaptation of Peter Jackson's King Kong. It is part first-person shooter with players taking upon the role of the character Jack, and part third-person beat-em up as players play as Kong.

Although games in which the player takes control of multiple characters are not exactly rare, King Kong takes this to in the unusual direction of changing the style of gameplay dramatically. Whilst most of the game is played through the first person perspective of Jack Driscoll, in the form of a first person shooter, the player also occasionally will switch to the role of the titular ape, King Kong, and with it to a third-person beat-em-up / platforming gameplay.

Whilst playing as Jack, however, the game still manages to divert from the traditional first person shooter archetype most games follow by making ammunition for automatic weapons such as guns sparse and scattered far away, meaning the player must to learn to use bones, torches and sharpened sticks to fend off dinosaurs, giant bugs and other ghastly creatures.

The notable lack of a HUD also increases the difficulty factor putting players in a position where they must judge how far and where to throw their projectiles (although cross-hairs may be turned on via an in-game option).

Due to the lack of a HUD, the game introduces various methods to keep the player aware of their remaining ammo count such as having Jack shout out how much ammunition he has left whenever he reloads his clip or allowing players to manually check their ammo with a button press in which Jack will call out how much ammunition he has remaining. Also when players sustains a significant amount of damage, the screen turns red and blurry and Jack's breathing and heartbeat will sound louder than usual. All this serves to create atmosphere within the game, which although used frequently today, was considered somewhat pioneering upon the games initially release.

Once 100% game completion is obtained, an extra scoring system is unlock in which players can replay each chapter and try to earn the highest score possible. Included within each copy of the game was a unique internet code which players could enter their personal high scores into the Ubisoft's King Kong website (www.kingkonggame.com), although Ubisoft later redesigned their website and made this feature obsolete. The players total score is kept and depending on the total score achieved will unlock additional extras within the extras menu as outlined in the extras section below.

The maximum high score which players can achieve for each chapter is 20,000 points. Points are awarded for performing actions such as killing enemies as well as completing the level itself and lost for dying as well as using bullets or spears. Below is a general guide for the point system in place:

Based on the players percentage of game completion and the overall score accumulated, specific things will unlock within the extras section found on the main menu.

As the director of the 2005 remake of the movie King Kong, Peter Jackson worked very hard to make sure the video-game tie-in would be a more pleasurable experience for gamers than most other movie-game tie-ins which are on the whole considered sub-par by the video game community. Jackson's own background as a video-gamer is known to have prompted this.

The game was made alongside the film and was seen as a collaborative effort between the cast and crew of the film and the developers of the game, two groups of people attempting to tell the same story through different mediums, and trying to evoke different experiences, whilst maintaining a positive response.

Almost all of the cast from the 2005 motion picture lent their voices to the game including Jack Black, Adrien Brody and Naomi Watts. As well as that, Andy Serkis, the critically acclaimed motion capture performer praised for his acting as Gollum in The Lord of the Rings trilogy of movies, and playing King Kong in the movie provided his services for the video game as well.

The soundtrack was composed by Chance Thomas and was released free on the official website. It contains mysterious and powerful elements, similar to motion picture score, composed by James Newton Howard.

Peter Jackson's King Kong: The Official Game of the Movie requires 6.2GB of space to be installed on an Xbox 360 HDD. 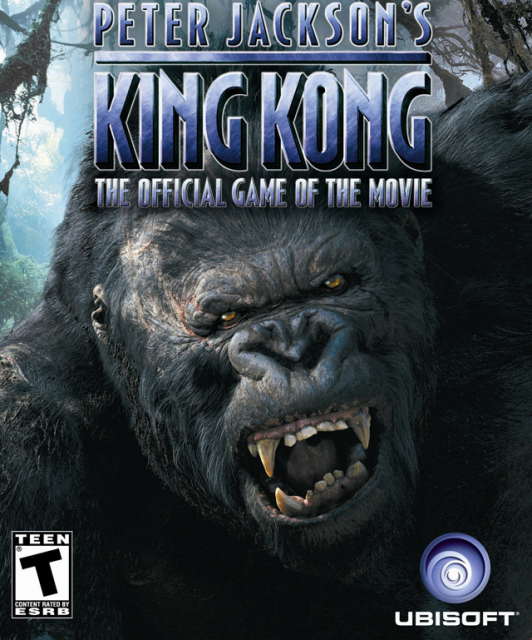