Real Bout Fatal Fury (known in Japan as Real Bout Garou Densetsu, which loosely translates to "Real Bout: Legend of the Hungry Wolf") is a 2D fighting game developed and released by SNK for arcades (using the Neo Geo MVS hardware) on December 21, 1995.

The fifth installment of the Fatal Fury series, Real Bout Fatal Fury revamps on the game engine used in Fatal Fury 3 by simplifying its control scheme (including three attack buttons of different strengths and a dedicated button for the "oversway" system) and introducing a new Power Gauge (allowing players to perform special counter-attacks and super moves). The bosses from the previous game are now part of the main roster, along with three fighters from previous games (Duck King, Billy Kane, and Kim Kaphwan). It is also the only game in the series to feature ring-outs, where fighters can knock each-other into breakable walls at the edges of the stage to open it up.

Set after the events of Fatal Fury 3, the story involves crime boss Geese Howard, who organizes another "King of Fighters" tournament (after coming back "from the dead") hoping for a fateful rematch against his adversaries (brothers Terry Bogard and Andy Bogard).

Real Bout Fatal Fury is the only game in the Fatal Fury series to feature the concept of ring-outs. When the player performs certain attacks on their opponent while the opponent is next to certain boundaries, those barriers would eventually break, causing an instant lose for the player that falls off the boundary. 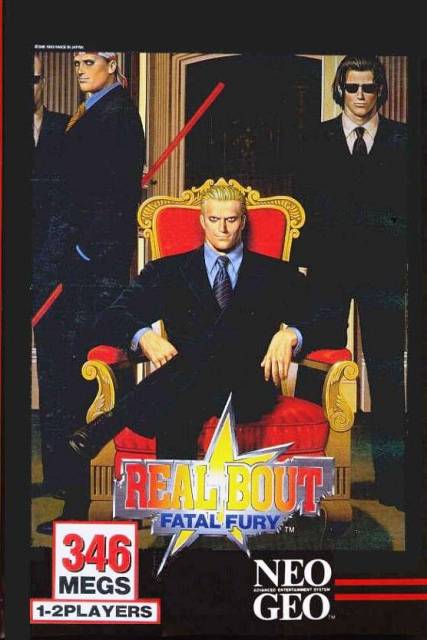