A fast-paced puzzle-platformer that debuted in arcades, and later moved to home gaming systems; including the Commodore 64, NES, and Nintendo's Virtual Console.

In Solomon's Key, the wizard Dana adventures through 48 action-puzzle levels (and 15 "secret" levels), searching for items and avoiding danger. Dana uses his magic wand to strategically create or destroy stone blocks, in search of each level's key and exit door. Various monsters block Dana's progress, which he can avoid, trap with blocks, or fight with fire spells.

The game was first released in the Arcade and was ported to various systems, including the NES. Both the Arcade and NES versions were added to the Wii's Virtual Console, with the latter version also becoming available for the 3DS's and Wii U's Virtual Console. It was also one of the games selected for the Famicom Disk System Disk Writer service in Japan and added to Hamster's Arcade Archives collection. The 2005 compilation Tecmo Classic Arcade for Xbox also includes the game.

The level design becomes increasingly devious as it progresses and often makes it possible for the player to trap themselves, making it impossible to finish the level. Other levels require precise timing to reach the key and the level's door, while enemies become more frequent and aggressive. Players start with three lives, but can continue by holding UP and pressing A + B from the "Game Deviation Value" screen. Once players move beyond level 40, continues return them there. Finishing the game means completing levels 40 through 50 with only 3 lives, a very challenging feat.

Players can do three things to help Dana move through each level, search for the key, and avoid danger.

While movement seems simple at first, the game makes use of its limited mechanics to create ever more difficult puzzles that call for precise jumping and block creation. Players who can place blocks in mid-jump (creating a block below Dana while in mid-air) will find the game's hardest puzzles more navigable.

Game levels organize around the Zodiac's 12 houses, with 4 rooms per sign. Level 1 to 4 is Aries, 5 to 8 is Taurus, and so on, through Pisces at 45-48. When players pick up the constellation tile in the last room of each group (level 4, 8, 12, etc.), they enter hidden levels that contain spells and special items. While Solomon's Key ends after level 48 (or the Fairy room, details below), players can earn better endings by collecting Seals of Solomon and these special items. 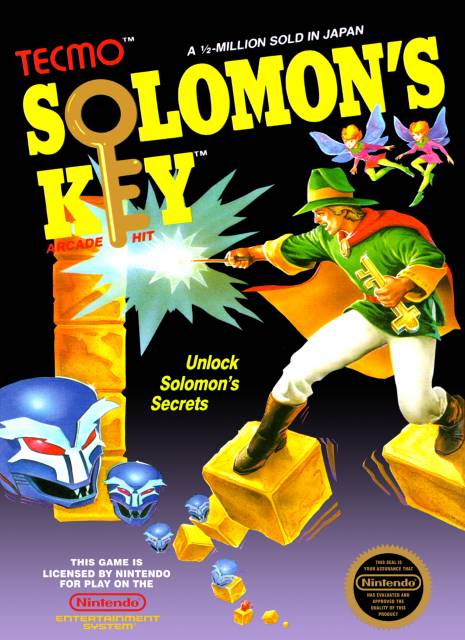