This adventure game has the player searching ancient Mayan temples for a lost professor and his team.

Tombs & Treasure is the second game in the Asteka franchise, a series of adventures games from Nihon Falcom. Tombs & Treasure, also known as Taiyou no Shinden: Asteka II, was originally released for the NEC PC-8801, NEC PC-9801, FM-7 and Sharp X1 (all Japanese computers) in 1986, but was later ported to the Famicom in 1988 and then the NES by Infocom in 1991 (the first American release in the Asteka series). In 1998 and 1999, Japan saw re-releases of the game on the PC and Sega Saturn.

The game stars two main protagonists: a male and a female. The names are customizable, but there are also a variety of computer chosen names that will be assigned if the player does not enter in a name. For simplicity's sake, they will be referred to as Mark and Celia. In addition to Mark and Celia, the player has control of José, a guide for the Mayan temple where the game takes place.

Tombs & Treasure is centered around the disappearance of an expedition by Professor Imes. Imes's expedition sought to uncover ancient relics in the city of Chichen Itza, but the entire expedition mysteriously vanished, leaving only their guide, José. José aids the team (Imes is actually Celia's father), and they begin searching Chichen Itza for clues.

There are a variety of locations to explore, and for the most part the story is non-linear. After discovering numerous artifacts, Mark, Celia, and José find themselves in front of the Well of Sacrifice, where most of the expedition disappeared. Mark enters alone, and is trapped. After he manages to escape, Celia has disappeared and José is unconscious in front of the Well. José said that Celia was kidnapped and taken to the Ball Court.

When Mark and José visit the Ball Court, it is revealed that José is actually "Scareface," an evil creature who actually intended to use the power of the "Akbal Jewel" for himself (and his friends, who are also evil demons). After Mark kills him, he finds Celia, who has been knocked unconscious. Mark fights the leader of the demons responsible for all of the disappearances: Tentacula. Celia and Mark barely escape before the temple collapses.

As the credits roll, it is revealed that the expedition that vanished was actually sent back in time to lead the Mayan civilization, and now Celia and Mark have joined them. Professor Imes is now the "High Priest Professor," and everyone lives happily ever after. After the credits, a line of text alludes to a sequel, although this was the last Asteka game ever released.

The gameplay in Tombs & Treasure alternates between two different perspectives. Either first-person perspective, which is more akin to point-and-click, or top-down perspective (for overworld exploration), which resembles that of a role-playing game (e.g. Final Fantasy). The game is centered around exploring various structures located in Chichen Itza, gathering treasure and uncovering clues.

The player has a variety of options that allows them to interact with the world (these options are only present in the first-person perspective portions of the game). These commands are Fight (which is used in battle), Change (which is used to switch between the three playable characters), Go (which is used to move characters around), Look (examine an item), Take (used to pick up various items), Put (this automatically places the selected item, if it can be placed), Use (the player can select an item to use), Move (this command allows the player to move an element in the playing field), Push (this command pushes an element in the playing field), Smash (akin to Move and Push, this is used for interacting with elements), Join (combine two items), Wash (clean off items in the Well of Paradise), and Wait (which allows a certain amount of time to progress).

In the overworld, there are no options like these. These options are only used to interact with items in a "point-and-click" atmosphere. In the overworld, the player is able to enter a variety of structures, ranging from the Ball Court to the Castillo pyramid.

Tombs & Treasure also has some role-playing elements. At predetermined times, the characters actually level up, gaining more health and attack power. The "random encounters" in this game are also predetermined, and incredibly sparse. During these battles, it is impossible to heal, although fleeing is possible. After each battle, the characters are fully healed. Fighting is done with either the characters' bare hands, or the sword (if it is equipped using the "Use" command). 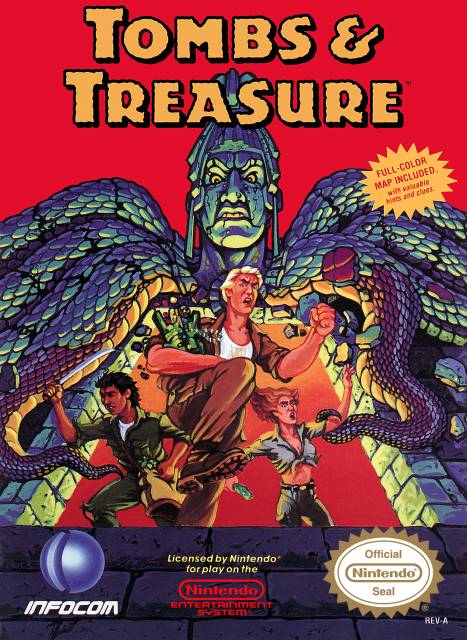