Become a new member of the school's Literature Club in this cute game! Make friends with each of the sweet club members and write poems to increase your bond with them. Will you write the way into her heart?

Doki Doki Literature Club! is a freeware indie slice-of-life visual novel developed and released by Team Salvato for the PC, Mac and Linux on September 22, 2017.

Players control a high-school student who is brought into his school's Literature Club by his good friend, the youthful Sayori. There, he makes friends with the rest of the group (including timid Yuri, hotheaded Natsuki, and club leader Monika). Along the way, players must choose a series of words to create poems (which, depending on the choices, increase his bond with each of the girls).

Unlike most visual novels, the game is prefaced with a warning that it is not suitable for children or those who are easily disturbed. While sensitive topics (such as depression and child abuse) are touched on at certain points in the story, the game is better known for its surprise (and macabre) mid-game plot twist, completely changing the narrative from an innocent slice-of-life game to metafictional psychological horror.

It was developed in the Ren'Py Visual Novel Engine. While the original game is free, players can support the developer buy purchasing a downloadable "fan pack" (containing the game's soundtrack and some artwork).

It later received a premium re-release, known as Doki Doki Literature Club Plus!, released digitally by Serenity Forge for the Xbox Series X|S, PlayStation 5, Xbox One, PlayStation 4, Nintendo Switch, PC, Mac, and Linux on June 30, 2021. This version includes six new Side Stories, high-definition graphics, and a built-in music player with 13 all-new tracks. Unlike the original game, this version boasts its "psychological horror" elements in its advertising. The Switch, PS5, and PS4 versions of the game will be released in physical format on August 20, 2021. 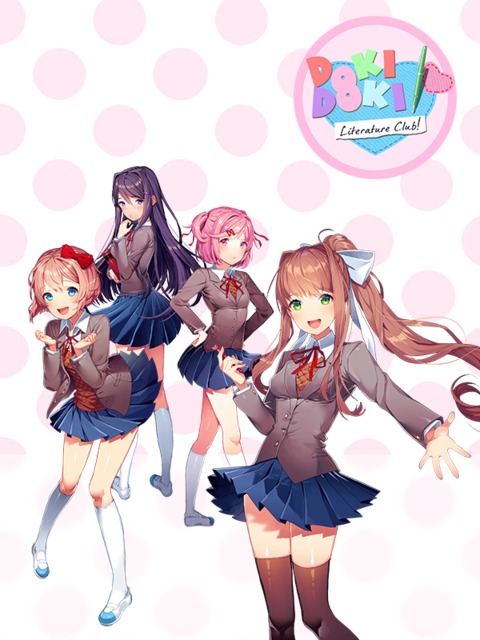