Forza Motorsport 2 marks the first appearance of Forza on the Microsoft Xbox 360. The game was developed by Turn 10 Studios, an internal team at Microsoft, and was released on May 29, 2007. Forza Motorsport 2 features lap-based races on several real-world circuits, including Sebring International Speedway, Road Atlanta, and Tsukuba Ciruit. The game features more than 300 cars, which are divided into four race classes and six production classes. Customizing your car with additional parts can improve its performance, and can also raise it up into a higher class. To keep things fair, some races have class restrictions.

Car class is determined by performance index, or PI. The higher the PI the higher the class. PI can be raised by upgrading your car's Engine, Tires, Aero parts such as Wings and Bumpers, or Handling parts like Brakes, Springs, and Differential.

These are standard production cars that you would see most people driving around the streets in today like the Scion tC or a Volkswagen Beetle. Examples of competitive online cars in D-class would be the Volkswagen Golf or the Honda Civic VTi. D-class PI is 0 to 400.

These are sport production cars and have a highly competitive racing scene online due to C class races being more based on driver skill instead of the car. Examples of stock C-class cars would be a Nissan Fairlady Z the Audi S4. Examples of competitive online cars in C-class would be the Scion tC or the Honda Civic Type-R. C-class PI is 401 to 550.

These cars are performance production cars. Examples of stock B-class cars would be the Lotus Exige or the Porsche Cayman. Examples of competitive online cars in B-class would be the Chevy Cobalt SS or the Audi TT 07. B-class PI is 551 to 700.

These are high-performance production cars, and likely have the most competitive online scene. A-class races have the best balance between car performance and driver skill. Examples of stock A-class cars would be the Ferrari 360 Modena or the Audi Tuning Silverbullet S4. Examples of competitive online A-class cars would be the Volvo S60 or Nissan Fairlady Z version S. A-class PI is 701 to 850.

These are ultrahigh-performance production cars. The S-class online scene is more based on choosing the right car for the right track than driving skill. Examples of stock S-class cars would be the Dodge Hennesy Viper or the Pagani Zonda. Examples of competitive online S-class cars would be the Mitsubishi Lancer Evo X or the Subaru Impreza 22b STi. S-class PI is 851 to 998.

These are cars that have been upgraded beyond the PI of 998. U-class does not have much of a competitive online scene because U-class cars are very difficult to tune since they can easily get too powerful. Examples of stock U-class cars would be the Chrysler ME Four-Twelve concept car or the TVR Cerbera Speed 12. U-class PI is 999.

In addition to customizing a car's parts for a performance boost, Forza Motorsport 2 also features a deep, layer-based livery editor that allows players to customize the paint color and apply vinyl shapes and lettering. Even though the game only provides basic shapes, some players have really taken this feature to extremes, re-creating famous real-world race cars or slapping corporate logos, anime characters, or classic video game characters all over the various cars.

Another large mechanic (pun intended) of Forza 2 is car tuning. When players upgrade a car with parts, the cars class and performance index will increase. Upgraded parts can be tuned, improving the car's performance without changing its class. Players can tweak a variety of settings like tire pressure, ride height, gearing, and spring stiffness to make their cars perform better. The race class cars (R1, R2, etc.) cannot be upgraded but allow for tuning based on their class.

Some players on the www.forzamotorsport.net forums have taken tuning and painting to the next level. Users have formed tuning shops, which usually consist of painters, tuners, test drivers, and sellers. Painters will create an awesome paintjob for the car. Tuners meanwhile pick a class and a car, and try to tune it as well as possible for either short ,medium, or long tracks. After the tuner thinks they have done a good job, they will send the car over to the test driver, who will try the car out. Then the test driver sends the car back to the tuner with some feedback about the tuning. Usually the driver will let the tuner what needs to be done to improve it, for instance, if the car needs to accelerate faster, or if it has understeer or oversteer. After the tune has been tweaked and tested again, its ready for release. The car is sent to the sellers, who then stock the auction house with copies of the car so that everybody can enjoy it.

The game features an innovative car auction system that lets players use in-game currency to bid on cars in real time. Players can choose how long the auction lasts, if it has a "buyout" option, and can have the car "featured" for an extra fee so the car sits at the top of the auction list. A few of the more rare autos called unicorn cars are only available via auction. Usually these unicorn cars are made by people that are on staff at Turn 10, like Fred Lowell, and will feature either the signatures of the Turn 10 team, or the signatures of other developers like their recent Too Human car featuring Dennis Dyack's signature.

In August of 2008, Microsoft released Forza Motorsport 2 Platinum Collection. The disc contained all of the premium DLC car and track packs that Turn 10 had released including the March, September and December car packs and the Premium Track Pack, as well as several limited edition cars that were only available to people that pre-ordered the limited edition release of the original Forza 2 disc, all of these DLC packs have a retail price of around $20 USD. All of the extra content was placed on a second disc that has to copy itself to your hard drive. Forza Motorsport 2 Platinum Collection is available for $19.99 which makes it significantly cheaper than buying a stand-alone copy of Forza 2 and all the DLC.

Forza Motorsport 2 requires 5.3GB of space to install on an Xbox 360 HDD. 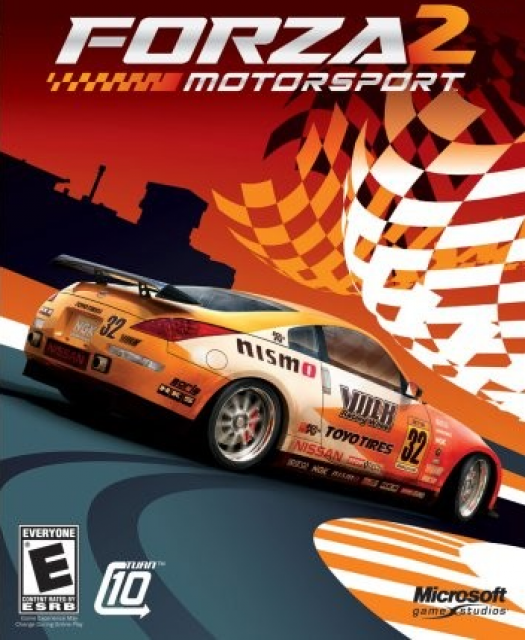