Midnight Club 3: DUB Edition is the 3rd game in Rockstar's well know racing series in which players can drive vehicles, cruise or race through 3 cities, San Diego, Atlanta and Detroit, while listening to a wide-range of songs. A wide range of vehicles and manufacturers are represented: tuners, sedans, muscle, trucks/SUV's, choppers, sport bikes, and exotic cars.

This game features a number of graphical enhancements over the previous installments, such as "speed smear", enhanced lighting effects, and the inclusion of flying debris and particles coming into view after the player crashes into certain objects, or travels across particular stretches of road. There is also the ability to heavily customize a player's vehicle. Other than modifying the vehicles external looks with new body parts, an extensive variety of vinyls, decals, paint jobs and more, the vehicles performance can also be improved.

The player starts out in San Diego talking to Oscar the mechanic who will guide the player through the game. As you advance through the game by winning races, you will unlock new parts, paint jobs, customization options, and cars.

As the game continues, different groups will invite the player to race. If you beat them, you may unlock driver abilities - "Zone" "Roar" or "Agro". The player will also eventually gain access to Atlanta (the second city) and then finally Detroit.

The types of races in Midnight Club 3: DUB Edition.

By far the most predominant race type in Midnight Club 3 DUB Edition is the Ordered Race. It is a point to point race in a fully open city environment, but rather than simply driving from point A to point B, the racers must drive by many checkpoints (marked by yellow flares) along the way, in a specific order.The game keeps this simple by only showing 2 checkpoints at a time, and by emphasizing which of those 2 the player must go to next. Furthermore, an arrow is displayed pointing the player in the direction of the next checkpoint.

Circuit racing works the same way as the Ordered Race, but the last checkpoint is placed the start, and instead of the race finishing there, the racers must drive up to 4 laps.

This is a very unique race type which only seldomly is encountered. In unordered races, the checkpoints can be collected in any order, aside from the finish line which always comes last. That makes this race type like a scavenger hunt.

These are seldomly occuring legal autocross races, where a closed-off track is laid out with no traffic, pedestrians, or police and the open environment is taken away, as the streets are blocked in with barriers. In Autocross events, the player must simply beat a certain lap time.

The track events are the same as Autocross, but you compete against other racers instead of against the clock.

When not in a race event, the player is free to drive around and explore the city freely. The city serves as a hub in which the player can access the actual racing events. (By driving up to an flare or a rival racer, and flashing the headlights) The player can also access the garage (to mod their vehicles, choose a different vehicle, or buy a new one) or a terminal toWhile in free roam, Rockstar icons can be found hidden in the nooks and crannies of the city. There are 12 in each city and you are said to get something for finding them all.

Midnight Club 3: DUB Edition is the first game in the series to include modification of cars. By winning races, the player unlocks new cars and options to customise them with. These options include enhancing the performance, adding vinyls and new paint jobs, and physically modifying the car, by changing parts such as wheels, bumpers, spoilers and hoods.

DUB Edition contains 100 songs in its soundtrack which are:

There are 7 types of vehicles in Midnight Club 3: DUB Edition : Tuners, Luxury Sedans, Trucks/SUVs, Exotics, Muscles, Sport Bikes, and Choppers. Here is a list of all the vehicles that can be found in Rockstar's racer:

The PSP version contains all 3 cities, all vehicle types, the same soundtrack, as well as robust modding features.

It was originally released on UMD in 2005, mere months after the PS2 and Xbox versions. It is currently available as a digital download from PSN, and is officially listed as Playstation Vita compatible. Midnight Club 3: DUB Edition (PSP version) is currently 19.99 US on PSN USA.

Players who owned the original Midnight Club 3 could import their save files into the re-release, carrying over cars and single-player progress. 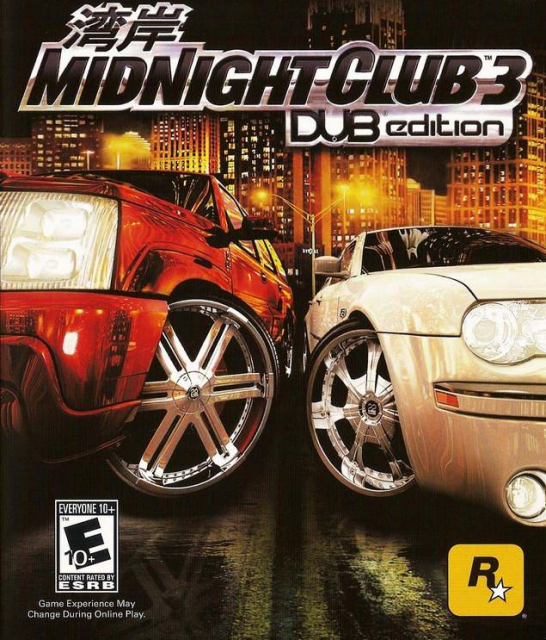