An early 3D, first-person, role-playing shooter, released by Bullet-Proof Software in 1985. Ahead of its time, it was an early example of both the Action-RPG and FPS genres.

Inhabitants of the planet Mu are planning to eradicate all organic life in the universe. To counter that, humans initiate project Epsilon3, sending the most skillful mecha fighter, or Dimensional Fighter, to liberate three cities.

The player can choose to start in one of the game's three cities, each varying in difficulty. the game is viewed from a first-person perspective, and uses monochrome 3D polygon graphics to represent buildings as abstract blocks; the player can choose the colour scheme, for the world and the enemies. The player explores a city in a similar manner to a first-person, dungeon crawler RPG.

The game uses an action-based combat system, triggered by random encounters with enemies (presented as 2D sprites). The combat system is similar to that of an arcade-style light-gun rail shooter, where the player cannot move the character but must rely on stationary aiming to eliminate the enemies on screen. It is necessary to aim and shoot, and for possibly the first time in gaming, some enemies require the player target an enemy's weak point to defeat them.

There are a variety of weapons, in two categories: beam weapons (plasma, laser, etc.) and launchers (rocket, missile, etc.); these can be assigned to shortcut keys during combat. After successfully defeating enemies, weapons and ammo can be acquired, while the player character is awarded experience points and grows stronger.

The game was essentially a combination of a computer-style dungeon crawler with an arcade-style shooter, much like later FPS games such as Arsys Software's Star Cruiser and id Software's Wolfenstein 3D. Epsilon3 also went a step further by allowing the player to aim the weapon (like Gun Buster or Quake), but due to the lack of a mouse, this meant the player would have to be stationary during combat. Also, like other first-person dungeon-crawlers at the time, the player could only move in four directions, in 90-degree increments.

The gameplay has similarities to 1984 release Kidou Senshi Gundam Part 2: Tobe Gundam, another proto-FPS where players also explore a city in a similar manner to a dungeon crawler, with buildings represented as abstract wire-frame blocks. Epsilon3 improved on it with 3D polygon environments, and a faster-paced combat system (whereas Tobe Gundam's combat was slower-paced due to its text-based interface).

The game's influence is apparent in 3D Japanese computer games that followed it in 1986, such as SeeNa, Carmine, and Wibarm, for example. 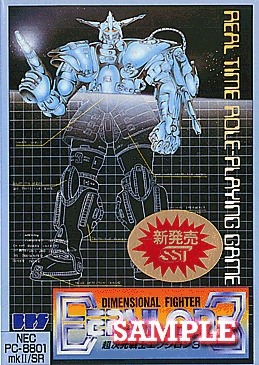