A sci-fi adventure game from Enix, released in 1983. Set in a post-apocalyptic future, the story is about the last survivors of a nuclear war going into crygenic sleep and waking up a hundred years later. The game features a day-night cycle that impacts the story, where certain events may only occur at a specific time.

The game is a graphic adventure / visual novel with a text-parser interface, supporting text interaction as well as commands assigned to function keys, such as those used for navigation. The player must explore the environments and combine verb commands with objects in order to advance.

This is the earliest known game to feature a day-night cycle that impacts the narrative, where certain events may only occur at a specific time. It is also one of the first games to feature a post-apocalyptic sci-fi plot, along with (but more detailed than) Bega's Battle that same year. Zarth's 2D anime-style pixel art graphics were also detailed for its time, with the artwork of a female character in the intro standing out in particular.

In the 21st century, powerful computer systems were invented. but humanity failed to control them. Near the end of the century, one such computer system, the weapon system Orion, triggered a devastating nuclear war, bringing the human race close to extinction due to the nuclear fallout. The remaining human survivors find shelter and go into a cryogenic sleep. Waking up 100 years later, they go out onto the surface, to face a new, unknown world... 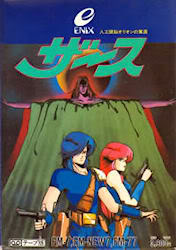