Genesis: Beyond The Revelation

Squaresoft's first RPG, this was an early futuristic sci-fi RPG for the PC-8801 and PC-9801 computers, featuring a post-apocalyptic setting and isometric, tactical turn-based battles.

In addition to its post-apocalyptic sci-fi mecha plot, the game was also notable for early use of isometric, tactical turn-based battles, which were triggered by running into enemies visible on screen, rather than random encounters.

A series of devastating wars and economic disasters influenced the Earth's atmosphere. Various types of energy were released, and as a result the planet's continents began to change shapes. The ensuing cataclysm deformed the Earth's surface, and it changed beyond recognition. Most of the planet turned into a desert. But humanity survived. Humans built new cities in the wilderness, and new organizations emerged. Surviving in this world will be anything but easy...

Genesis: Beyond the Revelation, MobyGames 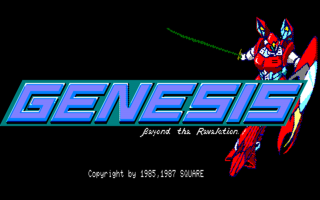