The game, designed by Hironobu Sakaguchi and Kazuhiko Aoki, featured mecha originally designed by Nagano Mamoru and music comnposed by Nobuo Uematsu, being the second video game score he ever composed. The game had an unusual battle system, which involved the player controlling a customizable mecha robot from a first-person view.

It was a space opera that followed a group of young people from Earth caught up in a war between a solar system spanning government and a group of rebels.

The game was the fifth game that Square had published, and the third that they had developed themselves. The game's story was adapted into a manga and was serialized in Hobby Japan magazine from 1986 to1987. The chapters were collected into two tankōbon volumes labeled "Part I" and "Part II", released in December 1990 and April 1991, respectively. A sequel titled Cruise Chaser Blassty 2 was released in April 1992.

Carmine The Screamer Genesis: Beyond The Revelation Zarth Alpha Artelius 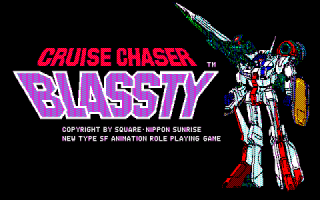