Warriors of Might and Magic is an action role-playing game developed by 3DO. Step into the shoes of Alleron, a soldier framed for a crime he didn't commit, and seek to discover the truth behind this conspiracy.
PlayStation 2

Published and developed by The 3DO Company, Warriors of Might and Magic was released for the Playstation, Playstation 2, and the Game Boy Color. Each version was essentially a different game, though they all follow a similar storyline. All three versions star Alleron, a guard captain accused of necromancy.

Warriors of Might and Magic follows a traditional route of Action RPG gaming. Players start in a hostile environment from the start, and are given their first equipment and spell at the start. The game requires caution, and wise use of health potions, as they are the only means of recovering hitpoints.

There are of a variety of weapons, shields, armor and items, all with different elemental bases and effects.

Combat itself takes place in a real-time fashion, allowing players to dodge, guard and counter-attack as they see fit. With 27 available spells total, Magic also plays a key role in battle, and it may be used for anything from slowing an opponent, to buffering your own strength and defense, to causing a foe to fight for you. From summoning an army of phantoms, to burning your enemy to a crisp, to increasing your speed for a short time. There are many different spells to choose from, and they all have their uses.

Like in most RPGs, players gain experience by defeating enemies. Upon leveling up, players may distribute points to their attributes as they see fit. Alleron's stat categories are as follows: Might, Speed, Intelligence, and Endurance.

Intelligence- determines the effectiveness of spells, as well as Alleron's total mana points.

The game opens with Alleron on trial for necromancy. This seems to be a formality, rather than a real trial, as sentence is passed right away. The Inquisitor places a cursed mask called "The Mask of the Accused" upon Alleron's face to mark him as a necromancer. The mask seems to take a life of it's own, driving claws into his neck so that it cannot be removed. Alleron is then cast into the Pit of the Accused, and the game starts immediately.

Alleron must escape the arena area they have been thrown into, and through a series of prison cells and sewers that are crawling with monsters and undead creatures. From here, it is up to the player to escape the Pit, and reach the outside world.

Along the way, he meets and rescues an orc named Apok from the undead, and Apok in return helps Alleron by giving him a magic ring, and later aiding him in escaping the Orc Mines.

This leads him into a ravine, where he meets a talking raven named Carlon that has somehow had his feet magically trapped in a rock. The raven agrees to help Alleron remove his mask, if he will find a potion to dissolve the stone.

Following the ravine floor, Alleron finds himself in the orc-populated Village of Draklor, which holds even greater dangers. Draklor, the new orc chief, is preparing to have the old chief killed as per some kind of tradition. The old chief's wife is distraught and asks Alleron to save her husband, which he does. Though grateful, the reunited couple then asks that you recover their food. Draklor has taken all they had to eat in order to celebrate. Alleron once again rises to the occasion and confronts the cruel orc chieftain, managing to slay him.

The old chief and his wife are extremely grateful and tell him about a way out of the ravine. In a small cave near the top of the cliffs, Alleron finds a potion that can free the raven, and in return, the bird directs him to the Monastery of Enroth.

At the monastery, Alleron meets a monk named Saelo, who introduces him to his apprentice, Daria. Though he mentions the quests of Enroth, but insists that he cannot help a known necromancer. As Daria leaves the room, he slyly directs Alleron's attention to a tapestry saying "For example, I could not direct ones attention to this map, detailing the first Quest of Enroth." Alleron then makes for the site detailed on the map.

After battling countless gargoyles and golems, Alleron has both the Red and Green Gems of Enroth in his possession. We then see Daria speaking with The Inquisitor, and complaining that Alleron is still alive. The Inquisitor mentions a prophecy and says it forbids her to kill Alleron. Daria retorts that she would never bloody herself, and The Inquisitor assures her that so long as Alleron wears the Mask of the Accused, his mercenaries can kill him, but Daria does not seem convinced.

Passing through a magic gate requiring both gems to pass, Alleron finds an ancient tome revealing a startling secret: It has been foretold that only a child of Einar, one of the immortal ancients, could complete the Quests of Enroth. It begins to foreshadow Alleron as the world's guardian, and a son of Einar. The book also states that the children of Einar cannot kill each other.

Upon his return to the surface-level of the Monastery, Alleron finds Saelo preparing to leave. He questions the monk, and Saelo replies that he is planning to go to the City of Magic, a dangerous trip to be sure, and that it is there that the magic vial exists that can be used to remove the Mask of the Accused. Alleron offers to go in his stead, leaving Saelo to marvel at his bravery, and to question if he might truly be the "one".

After battling his way into the City of Magic, Alleron meets a wizard who aids him in passing through a magical doorway in exchange for finding his rune and scroll. In the next chamber, he finds the potion he was sent for, the one that can finally remove the Mask of the Accused. However, to his surprise he also finds Daria. She blasts the entrance to the chamber, making it impossible for Alleron to return the way he came. She chuckles, telling him he must now travel through the Maze, and the lair of the dreaded Talinthraxus, a dragon who is under her control.

Arriving at the maze, Alleron finds his way through with the help of a mysterious coyote. The coyote also leads him to people who have been imprisoned in the walls by dark magics. After fighting through and navigating the maze, Alleron comes face-to-face with the "Minotaur Twins" who are to blame for the trapped people (they also guard the exit). Stronger than the dozens of minotaurs he has already faced in the face, Alleron manages to overcome them, and returns to the people to find they are free. He then proceeds to the lair of Talinthraxus, parting ways with the helpful coyote.

The mighty dragon proves to be a powerful adversary, but Alleron defeats and slays him, finally escaping the City of Magic. As he arrives at the Monastery of Enroth, it is immediately apparent something is wrong. The entire Monastery has been overrun by the undead! A surviving monk explains that Daria has betrayed them and summoned the undead that are laying siege to the once peaceful place.

Alleron manages to kill all of the undead in the Monastery, and he goes to find Saelo. Saelo then explains that Daria is one of the offspring of Einar, and that she was placed in his care. He had tried to turn her from her ways, but to no avail. Daria had dabbled in witchcraft in its darkest form: necromancy. He explains that everything that has been happening has been according to prophecy and that now, according to prophecy, Daria will attempt to resurrect Daglathor, an evil spirit creature who was sealed away in a volcano by the Ancients.

According to Saelo, it is foretold that only Alleron can stop Daria. He then hands Alleron a potion, commanding him to drink it. As he does, he looks into a mirror, seeming to come to the realization of who he really is, a son of Einar. He then removes the mask, leaving scars in his neck where its claws had dug into him. Saelo tells him to keep the mask, and that it will "bring him luck", and then sends him to the Temple of the Depraved.

Gothic Legacy of Kain: Soul Reaver Enclave Archangel Crusaders of Might and Magic Lords of the Fallen Blade of Darkness Brightis Draconus: Cult of the Wyrm 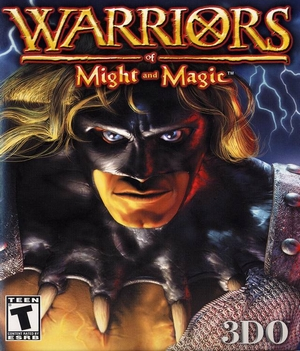