A chess game that can be played using the Wii Remote. Wii Chess has an online multiplayer mode as well.

Wii Chess is a chess simulation game released in both Europe and Japan. In Europe, it was released on retail (at a budget price) on January 18, 2008. In Japan, it was released as a WiiWare title called Tsuushin Taikyoku: World Chess on September 30, 2008. The game was developed by Spice Games and published by Nintendo. The engine that Wii Chess utilizes is the commercial Loop chess engine. Wii Chess was released to a generally good reception from critics, with a 67% rating on Game Rankings, and a 59% average rating on Metacritic. The game was criticized for its bland graphics and the not very exciting representation of chess.

Wii Chess is played with the Wii Remote. By pressing buttons on the D-pad, the player can move around whichever chess piece is selected (rather than selecting a piece with the motion sensor). The game also has a tutorial mode for those unfamiliar with chess (showing new players how to move certain pieces around the board and their functions). Players also have the option to record their games and then replay them later. One of Wii Chess' most praised features was its online multiplayer component (over Nintendo Wi-Fi Connection). People with the Japanese version of the game can play those with the European version, as well as the other way around. 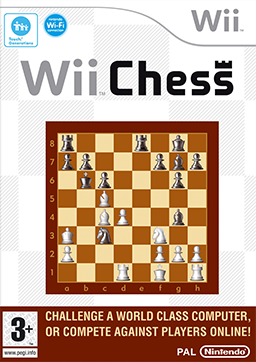