Spy Fiction is a stealth-based video game by Sammy Studios and Sega for the PlayStation 2. The game is promoted as "stealth action inspired by genre-defining espionage classics" and gives players the ability to disguise themselves as any character in the game.
PlayStation 2

The plot involves an evil terrorist organization's (called ENIGMA) plot to wreak havoc on the world with a flesh eating virus called Lahder, and cause it to bring about World War 3. You are a member of the the fictional Special Execution Agency (S.E.A.), part of their special Phantom Unit. Your mission is to stop ENIGMA from spreading the Lahder virus. The story is told in medias res (the first level is actually the final chapter), with the actual story beginning two months prior to the game's opening.

Both the gameplay and the plot contain numerous homages to famous pieces of "spy fiction" such as the 007, Mission: Impossible and Metal Gear franchises. 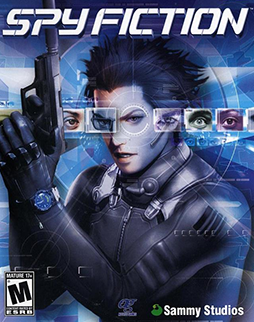