Ethan Thomas returns in Condemned 2: Bloodshot, a melee-focused first person horror game. Ethan battles with alcoholism and his own inner demons while tasked with a mystery surrounding the city's chaos and dark secrets behind a new epidemic.
Xbox 360 PlayStation 3

11 months after the original Condemned: Criminal Origins, Bloodshot features a Ethan Thomas. Consumed by alcohol and living on the streets, the now grief-bearded Thomas is recruited back into the SCU in order to deal with a city-wide phenomenon wreaking havoc and leaving mass delirium in its wake. Dealing with inner demons, Thomas will find the answers that he seeks, uncovering the dark truth hidden behind all of the problems plaguing not only the city, and himself.

Bloodshot brings back that same blunt and bloody combat as its predecessor, now in an even grittier environment. A first person action game, Bloodshot offers new ways of pummeling enemies not seen in the original, including hand-to-hand combat. The player can also chain attacks together, creating combos from simple little jabs and hooks to much more complex tactics. The game also offers environmental kills, which are dependent on the level. Investigation and problem solving also return from the original.

Bloodshot offers a wide array of melee weapons and firearms, now with a durability element. Most melee weapons will degrade, forcing the player to look for other implements of destruction. Ammo is restricted to what is in the firearm at the moment the player gets a hold of the weapon. Due to his alcoholism, Ethan is incapable of steady aim when sober, and requires frequent doses of alcohol in order to fix his shaking hands and blurred vision. Additional special abilities are unlocked later in the game. The investigation aspects are enhanced. In addition to forensic photography, blood spatter patterns can be analyzed to identify bullet wounds, stabs wounds, blunt force trauma, so on.

An alternate game mode unlocked after beating the game called FPS mode, wherein the player is allowed to start each level or mission with one firearm and unlimited ammo. Any guns procured in the level also have unlimited ammo after you pick them up. Completing this mode unlocks an achievement.

Condemned 2: Bloodshot is first in the series to offer multiplayer, which includes four modes:

When beginning a match, the player chooses between SCU or bums. There are numerous character models. Bums usually wear masks such as a pig's face, hockey masks, and clown masks. Weapon selection is tied to faction. SCU players can choose from the shotgun, rifle, or pistol. Bums choose from a brick, Molotov cocktail, or 2x4. There are nine multiplayer maps, however several curb stomp finishers and environment specific kills are not present in it.

Condemned 2: Bloodshot requires 6.8GB of space to install on an Xbox 360 HDD. 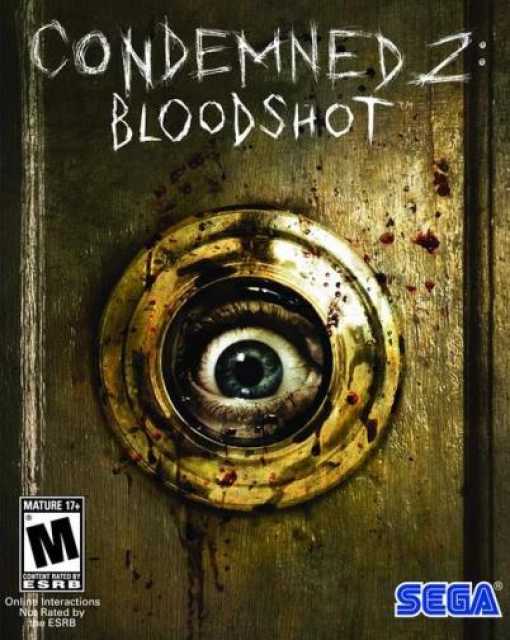