Summoner is a third-person RPG developed by Volition and published by THQ. It was a launch title for the Playstation 2, and was released on October 25th, 2000. It was also ported to PC on 19th March, 2001, and Mac OS on 12th July, 2001. It recieved decent scores from reviewers, the PS2 version scoring 74 on metacritic. The sequel, Summoner 2, was released in September 2002.

The gameplay uses fairly standard action RPG mechanics, including a fully controllable, four person party. The player has full control over their parties levelling, able to distribute attribute and skill points where they wish. The combat is a mix of real time and turn based, with the player able to execute 'chain attacks'. These are done by pressing a direction on the d-pad with the correct timing when a character attacks an enemy. The combat system is surprisingly deep, with weapon types factoring into their effectiveness against diffrerent creatures, as well as the weapon's magical affinity being compared to the creatures strengths and weaknesses. Thanks to the joy of a third dimension, having the higher ground in a fight will count in your favour. As you progress through the game, the main character, Joseph, gains the ability to summon creatures as powerful allies in battle. Once summoned, the player can fully control the creature if they wish. There are risks involved with summoning, however. If Joseph happens to fall unconcious while a summon is out, it could turn on your remaining party members, which often results in failure, as well as broken controllers.
Alongside the robust combat system, Summoner contains an awful lot of text to read. The towns were fairly large, and most of the NPC's could be spoken to, if only briefly. Main characters often have a lot to say, most of it being important plot information. This focus was a large departure from the usual console RPG's of the day. Most NPC's would also offer sidequests wich offer an abundance of information on the lore of Medeva, the kingdom the game takes place in. The character you team up with through the game also have their own sidequests and storylines.

Main character Joseph was born with the mark of the summoner on his hand. As a boy, he attempted to use his power to save his village, Ciran, from attack by summoning a demon. He isn't powerful enough to control said demon, which proceeds to kill his family, friends and neighbours while destroying the entire village. Joseph flees and vows to never use his powers again. The vow is (somewhat inevitably) broken when Medeva's neighboring kingdom, Orenia, invades. Orenia's king, Murod, is attempting to find the man born with the mark of the summoner. Joseph's main goal through the game is to find six rings (ligh, dark, earth, air, fire, water) in order to summon a super powerful beastie and defeat Murod.

After completing the game and viewing the credits, a computer animated version of the Dungon and Dragons sketch titled "Summoner Geeks" plays. It was circulated on the internet as a promotional video before the release of the game. It featured characters from both Summoner and Red Faction.  (check out the video here:  http://video.google.com/videoplay?docid=-5331429585309819856# ) 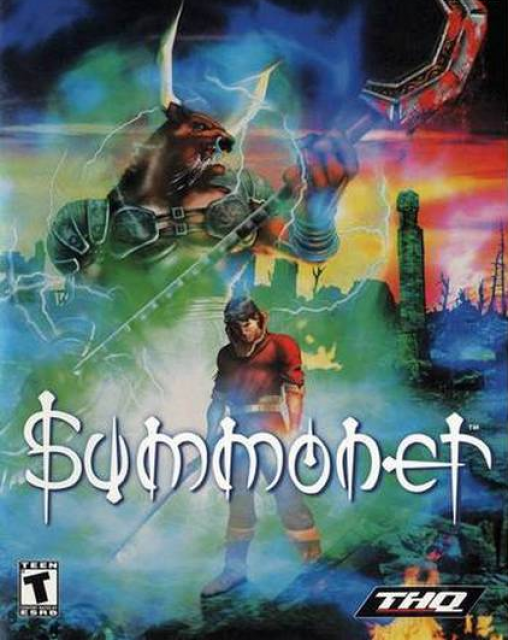