The Project Gotham Racing franchise continues on the Xbox 360 as a launch title. The online play and focus on driving with style from the earlier games in the franchise remained, but the game saw a graphical leap and a different approach to content than its predecessor.
Xbox 360

Project Gotham Racing 3 or PGR3 was one of the launch titles on the Xbox 360. As the name suggests it's the third in the series. PGR3 is an arcade-style racing game and features over 90 licensed cars from 30 different manufacturers. Manufacturers include, Dodge, Ford, McLaren, Ferrari and Lamborghini and many many more. As the cars are licensed it gives the game a look and feel of the real thing. The tracks of PGR3 improve on that of it's predecessors whereby they give a stream less horizon so drivers can see the road ahead without having to wait for graphics to load as they drive. PGR3 Las Vegas, London, New York, Tokyo, and the ever popular Nürburgring in Germany. Unlike other racing games, PGR3 is about pure racing and damage to cars is only visual and basic at that.

PGR3 uses genuine engine sounds which were recorded in studios, which makes the game sound as realistic as it looks.

The career modes in PGR3 are two way, there is an offline mode which pits players against AI drivers and an online career against other players from around the world over Xbox Live. Both careers earn players Kudos and credits for winning races and various events. In the offline career mode there are various difficulty levels from Easy to Platinum with the latter earning drivers more credits.

Part of the Online career or online multiplayer, Gotham TV is a unique system which allows players not racing to view players race around. The Gotham Heroes TV channel features some of the best racers on the game and can be viewed by anyone. Gotham TV also allows you to save replays of races and view them which you can then take screenshots in.

During offline play or after an online race players can take screen shots of the race action rotating the Camera,Zooming, Panning, Spinning and adding simple effects to images that one takes. This feature can then allow screenshots to be downloaded from the PGR3 screenshot website, although the amount at any one time is limited.

Akin to it's prequels PGR3 sticks with the Kudos points system. This system allows players to gain credits by preforming stunts in-race such as drifting or drafting (tailing another car). These credits however are not which allow players to buy cars which is seen in the previous PGR games. However race wins earn players valuable credits which and be put towards the many cars up for sale in the PGR catalogue. Each car in PGR3 is allocated to a specific class depending on it's performance ability. There are five classes, A through E, the high performance cars being Class A, and the low performance cars in Class E.

Online play in PRG3 features a variety of race modes apart from the normal street race. Street race can be preformed in lap form or in a stretched version which involves racing from point A to point B. Other modes include Cat and Mouse which sees two teams attempting to prevent the "Mouse" which is in a slower car to the "Cat" from crossing the line before their own Mouse does. Eliminator is good old fashioned racing where the last to cross the line after each lap is eliminated. Cone Capture pits players against each other in seeing who can capture the most cones on a course in a certain time. Capture the track in another mode in which teams must produce the fastest times in a sector of a track to "Capture" that section, the most sections wins. Most of these modes are seen throughout the single career.

Bizarre Creations supported Project Gotham 3 with quite a bit of downloadable content, both free and paid. 3 official content packs were released within a four month span. Dubbed the (in order of release) 'speed', 'caddy' and 'style' packs, all contained new cars for use in single player and multiplayer and in the case of both the speed and style packs -- game updates and modes. The caddy content pack was released for free (to Xbox Live Gold subscribers) and included 3 Cadillac 'V-Series' cars and a chance to win a gamer picture if the player is able to set a top 100 time using one of the 3 cars included in the pack. 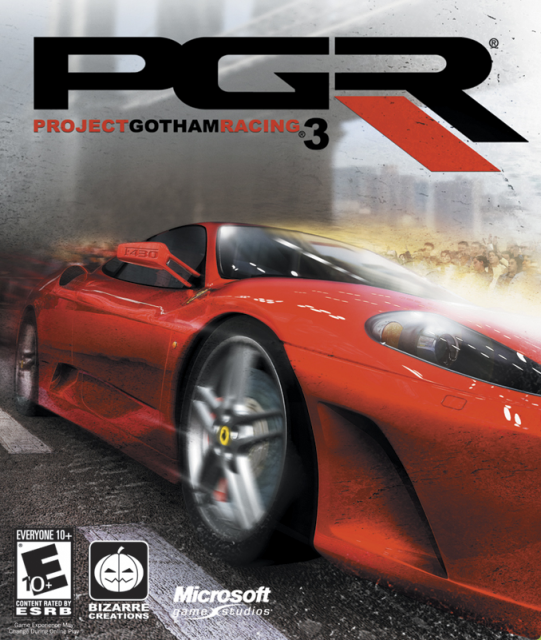