Gex is an old-school mascot platformer released as a killer app for the Panasonic 3DO.

Gex is a 2D mascot platformer developed by Crystal Dynamics and published by BMG Interactive Entertainment for the Panasonic 3D0 in 1995. At one point a pack-in game for the ill-fated system, It was later ported to the PlayStation, Saturn, and PC, and spawned two 3-D based sequels for the Playstation and Nintendo 64.

Gex (voiced by comedian Dana Gould) is an anthropomorphic teenage gecko living in Hawaii with his mother and siblings. When his father, a NASA employee, is killed in a space shuttle accident, Gex becomes a shut-in, refusing to do nothing except watch television for hours on end in an attempt to refuse coping with his father's sudden and untimely death. After trying everything in her power to get her son out of the house and away from the television, Gex's mother decides to move the whole family to California.

A change of scenery does nothing for Gex, however, and, after a few attempts by both his new neighbors and his family to get him away from the television, Gex's mom gets desperate and gives the TV away to gypsies. Gex soon runs away from home in outrage and befriends some local punk kids, one of which allows Gex to sleep in his garage.

Months pass and Gex's mental state deteriorates to the point where he considers an imaginary figure called "The Mayor" as his best friend. While skateboarding with "The Mayor" one day, Gex encounters a black limo, which, come to find out, is now owned by his mother. Another death in the family (this time an uncle, who is noted as being the original model for the Izod clothing company logo) has caused Gex's family to obtain a huge inheritance. Gex uses his share of the funds to move back to Maui, where he buys a mansion, a big-screen TV, and an obscene amount of food so he will never have to leave his house.

Of course, this being a 2-D platforming game, something bad is bound to happen that will cause the hero to go on some sort of ridiculous journey, and Gex winds up getting sucked into his new TV thanks to the villainous Rez, who plans on using our brave reptilian hero as the mascot for his hellish Media Dimension, an alternate universe where television fantasy becomes an antagonistic reality.

Gex is your typical mid-90's mascot platforming title. Players must avoid obstacles, collect television remotes, and fight enemies in order to get to the end of the stage. Levels are connected by hub worlds, each with its own television-related theme, and occasional boss battles liven things up every now and then. Gex's main mode of attack was a tail whip, and he could obtain power-ups that let him, among other things, breathe fire and frost-based attacks.

Gex was Crystal Dynamic's attempt to make a name for themselves by creating a Mascot for the 3DO. Development started with a small 5 person team in late 1992 when the newly recruited Lyle J. Hall was tasked with leading development of what would be the company's third major product. Told that the studio had Crash 'n Burn and Total Eclipse his set goal from the start was to create a mascot platformer for the 3DO which would involve the character's concept and creation, development of a platform, build a small team of developers and meet the tentative ship date of the end of 1994.

The first few months of development (while the development team was being constructed) Lyle spent his time working with E. Daniel Arey on conceptual ideas for the game focusing on the gameplay attributes and concepts opposed to building the game around character. It wasn't until one of the concept artists returned from a Hawaii vacation with the conceptual idea of "gecko shirts and lizards wearing sunglasses" which he had seen frequently during his vacation. With the general idea set the team then spent several months determining what exactly a tongue-in-cheek gecko would look like. Although the team spent a lot of time experimenting with various different styles (going as far as hiring Lucasfilm to assist with some conceptual work) the final design for the character was came for a rough sketch from lead animator Steve Kongsle. Lyle then set about establishing his core development team as he set about bringing Gregg Tavares to lead programming, Mira F. Ross as lead artist and Justin Norr to assist leading the design of the game.

From the offset the team knew that they wanted the ability for Gex to scale walls and crawl in practically any direction to help distinguish the game from its competition on the market. The team briefly considered to making the game one of the first 3D platformers but decided against it after seeing other developers struggling with development in three dimensions. However while the general mechanics were established the "pop culture satire" theme of the game had not.

Instead development began (known internally as "Gecko X") with the concept of Gex being a stuntman on various different movie sets as a means of showcasing various different unique environments. This premise didn't last long, primarily due to the lack of framework the premise provided to support a decent story and setup a villain which the team wished to incorporate into the game.

After a test level was completed using this early concept Lead Programmer "G-Man" expressed discontent with the game's direction and suggested a move to the game's final, more fantasy-themed direction. The character of "Gecko X" was redesigned into his current incarnation as "Gex" and a new villain, "Rez", was created as well. The stunt-gecko idea was also dropped.

The team began working on art assets for the game but, due to the power of the 32-bit Panasonic 3DO when compared to the 16-bit consoles the devs had been working on up to that point, development moved slowly for the Gex team. Crystal Dynamics's initial reluctance to add more employees to the team did not help the slow dev process, and it looked unlikely that the game would be ready for its original release date of June 1994. The company eventually hired more artists, however, and even contracted out some of the graphical to work to Silicon Knights, who would later gain notoriety for developing Eternal Darkness for the Nintendo GameCube.

June 1994 came and the game was only about halfway done. Levels were either completely redone with tile sets they weren't originally intended to use, or, in the case of a science-fiction themed world, scrapped entirely. Crystal Dynamics hired more employees to help finish the game, but Gex still needed a ton of work in order to stand out amongst the many other mascot platformers that had begun to flood the gaming market. Members of the development team worked 12-16 hour days, hoping to finish the game by Summer 1995. To kill off stress the tile set for the sci-fi levels was resurrected for hidden levels and two secret mini-games were added to the game's code. An 18 minute credit sequence was also created for the game, accessible by beating the hidden sci-fi levels.

When the game was almost finished, play testers found a hidden level created by lead designer Justin Knorr that contained the message "Didn't you think this level had some cool shit in it? This level was cut because the company didn't put you, the customer, first but just wanted to make money. Call Madeline Canepa at 415-555-1212 and give her a piece of your mind and my mind too". The level was cut and Knorr was fired from the company.

The game was originally slated to feature rail-shooter-esque levels in addition to the platforming segments, but these were later scrapped.

With the 3DO performing miserably in the gaming marketplace, Gex wound up being ported to the PlayStation and Sega Saturn shortly after its original release. The port was published by Crystal Dynamics and did not feature all of the secrets found in the 3DO version. In addition, the 3DO's save game feature was eliminated and passwords, considered a relic of the 16-bit era, were the only way players could continue the game at a later point without losing their progress.

A PC port was later published by Microsoft Game Studios after the success of the game on consoles.

Gex for the 3DO soon became the premier 2-D platformer for the system. Its success spawned two sequels, Enter the Gecko and Deep Cover Gecko, for the PlayStation and Nintendo 64, both later remade for the Game Boy Color. Despite its two sequels and handheld ports, however, Gex's popularity never reached as high as the Crash Bandicoot's and Spyro the Dragon's of the world. The series did not make an appearance on the last generation of consoles, and, with Crystal Dynamics busy with the Tomb Raider series this generation, it is unlikely that we'll see a new title in the series any time soon.

GMAN-GAMES: GEX - the game's lead programmer talks at length about the game's development 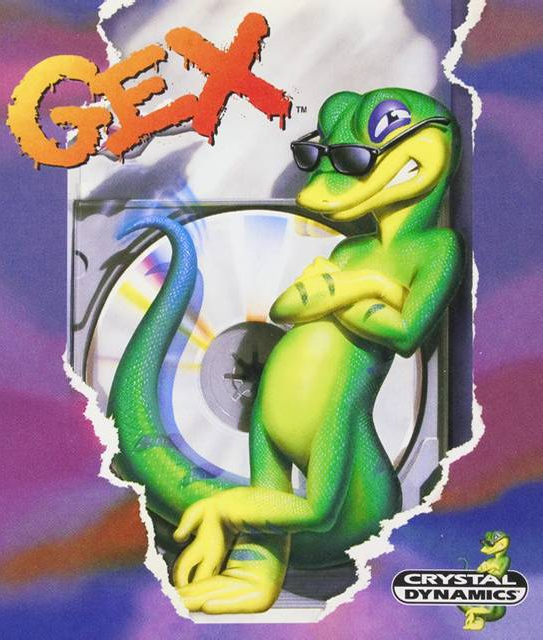