DICE's large-scale multiplayer shooter moves to the present day in this acclaimed sequel, whose online community has remained active for nearly a decade.

Battlefield 2 is the first modern military game in the Battlefield franchise. Taking place during a fictional 21st century war, the game features present day weapons, vehicles and a new persistent progression model. It also introduced squad mechanics and a commander role, while making intra-team communication much easier with voice-chat and in-built commands. The combination of these updates makes it easier for players to coordinate attacks across large maps.

The battles pit three major factions against each other: United States Marines, China & the fictional Middle Eastern Coalition (M.E.C). The game was updated many times over the years. The Special Forces expansion pack was released in 2005 that added night vision goggles, grappling hooks and many other accessories. The Euro Force booster pack added the European Union as a fourth faction. Armored Fury added multiple maps, weapons & vehicles.

Battlefield 2's "conquest" gameplay draws from the previous games in the franchise. Each map has two opposing armies fighting over a territory. To win the match one team must reduce the other team's "tickets" to zero. The tickets represent the reinforcements the team can bring in, and the number of tickets each team starts with is determined before the beginning of the game. To reduce the amount of tickets on the other team, players must either kill people on the other team or capture control points. The team with less control points has its tickets reduced at a slow but steady rate in addition to any reductions that might occur as a result of its players being killed. This rate is increased as the opposing team captures more control points. The game usually ends once a team's tickets are reduced to zero. Also, if all control points are captured by a team and the entire opposing team is dead (they cannot recapture a control point), then that team wins. Finally, if the game timer runs out, the team with most tickets wins.

There are seven player classes in Battlefield 2: Spec Ops, Sniper, Assault, Support, Engineer, Medic and Anti-Tank. Each class has its own unique set of weapons and functions. Players can pick up a kit from fallen players and change classes on the fly, or change classes when waiting to respawn. A few of the classes have different ways of earning points: For example, the medic class earns points for healing and resurrecting players, and the support class earns points for giving allies ammunition.

There are about 30 vehicles in the game which are all based on real-life military vehicles. The types of vehicles range from small, fast jeeps to amphibious APC's to Main Battle Tanks to jets and helicopters. Each faction in the game has its own set of vehicles, though each vehicle in a faction has an analogue in the other factions that performs essentially the same function, with minor statistic adjustments.

Battlefield 2 was the first game in the franchise to include persistent character progression. As players earn points, they earn rank promotions for their account. Players start at Private and, as they play the game, they earn Private First Class, Sergeant and so on. Each promotion earns the player a new weapon unlock. Each class has 2 weapons to unlock, each of which replaces the class's primary weapon if chosen in the class selection screen.

Battlefield 2 was the first game in the franchise to include the commander feature. The commander is a player who applies for the role who, in addition to any actions performed on the ground, also has the ability to lead his or her team in battle. The commander can view the battlefield from a strategic perspective and order players to attack, defend or move to various locations (though whether the players perform those actions is completely up to their discretion). The commander can also utilize a range of special abilities designed to help the team on a strategic level. These abilities include calling in a Unmanned Aerial Vehicle (UAV) to scan an area of the battlefield, pointing out enemies on the players' radar, artillery strikes to kill enemies, a complete battlefield scan the reveals every opposing player on the map to the commander, and supply and vehicle drops. A team with an effective commander has a distinct advantage over a team without a commander.

Another first for the Battlefield franchise was the implementation of squads, which are groups of up to six players banded together under a squad leader who acts as a mobile spawn point (when alive), relays orders from the commander, can request assistance from the commander (such as UAV's, artillery strikes, etc.), and issue his or her own orders. This feature encourages more cooperative gameplay, as squads under an effective squad leader are often rewarded in terms of points and battlefield assistance. The squad leader can issue orders such as attacking a certain location, defending a location, or moving to a location.

Battlefield 2 also has a more streamlined player communication system. In addition to the various text chat systems (at the server, team and squadron level), the game supports Voice Over IP (VOIP), and has a radial quick-communication system that players can utilize to make their character yell various phrases, such as "I need a ride," "Thank you," "Sorry," and so on. Players can also use this system to spot enemies, which has the added gameplay benefit of temporarily highlighting the enemy on their teammates' radar.

The large scale, combined arms multiplayer was initially stuck on maps which contained much recycled art. This inspired players around the world to create literally hundreds of modifications, presenting their own take on warfare in different locations with different armies, weaponry and machinery.

Many of these efforts like Forgotten Hope, Project Reality, Operation Peace Keeper, Desert Conflict came to fruition and are freely available for download. They often surpassed the the original a.k.a. vanilla BF2 in attention to detail and realism, also offering a wealth of new "toys".

Even though many mods enjoyed huge popularity after release, they couldn't tie in into the persistent progression and ranking that vanilla Battlefield 2 offered. The majority of players obsessed with badges, medals and points stayed away.

Additionally EA / DICE released their own expansion called Special Forces and DLC (Booster Packs) and later on announcing Battlefield 2142 thus fragmenting the community even more between all those options. Battlefield 2142 being based on the same engine as Battlefield 2, has been known to be taunted as an official "mod".

Due to a strong demand from the community, Battlefield 2 was patched recently to fully support widescreen resolutions from the video options.

Prior to patch 1.5, Battlefield 2 does not support widescreen resolutions natively and must be forced to fit widescreen monitors without stretching. To do this, you must right click the shortcut icon for Battlefield 2, go to properties, and then shortcut. In the target box you must add "menu 1.15 widescreen 1 szx 1440 szy 900" to the end of what is already there (It will show as "C:\Program Files\EA Games\Battlefield 2\BF2.exe" menu 1.15 fullscreen 1 szx 1440 szy 900) . Change the 'x' and 'y' numbers to fit the resolution of your monitor.

In 2014 the Gamespy master server for Battlefield 2 (and many other games) shut down, EA decided not to set up their own server and patch the game - this means you won't be able to play the game online unless you use a third party patch. BF2 fans has come up with their own solutions to this problem, one of them being Battlelog.co. Popular mods such as Forgotten Hope 2 and Project Reality have their own built-in solution.

Since the official server no longer being used, there is no way to check for valid product keys which means that you can play online with an unlicensed copy of the game.

Since Battlefield 2 is no longer being patched or worked on, the future is uncertain on how it will play on newer operating systems and hardware. Modders want to improve the game but are held back by the mod tools available, fans have set up an online petition - wanting EA to release the source code so that BF2 can be improved upon and continue to run on newer machines without issues.

Battlefield 2 received mainly positive reviews and has sold over two million copies. As of September 2008 its Metacritic rating was at 91%, with most criticism directed at its high hardware requirements (at its 2005 release date), bugs and, later on, its life span and lack of community support. Despite these criticisms, Battlefield 2 has gone on to be considered one of the best team-based multiplayer games to date, and still has a highly active player base.

Significant awards given to Battlefield 2:

2.3 GB needed to install this game, not including saved games or Direct X9 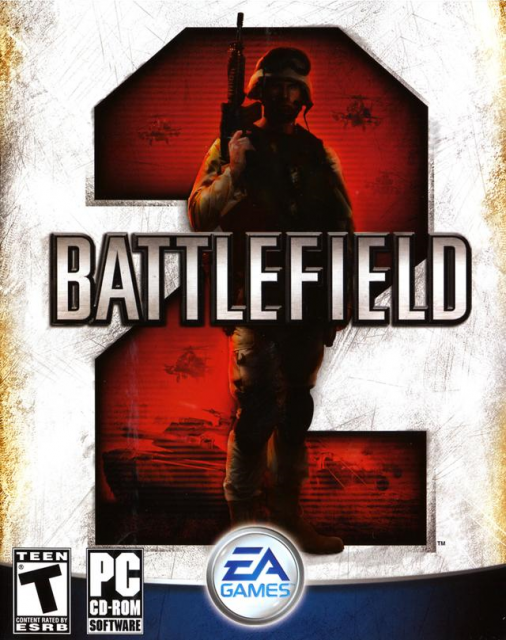