Treasure Master is an NES platformer notable for the contest surrounding it which allowed players to win actual prizes.

Treasure Master stars an average kid named Skooter (spelled this way in the manual, but "Scooter" in marketing materials) who comes across an old coin. He keeps the coin under his pillow and, after weeks of research at his local library, is still unsure as to what its origins are. During this time, Skooter begins to experience vivid dreams of traveling to strange worlds and encountering unusual but dangerous creatures, which he attributes to the coin placed under his pillow.

Finally, Skooter comes across a book titled "The Legend of the Treasure Master." In it, he learns that the coin he found can act as a key into another world that seems too outlandish to be real, but is. In this world there is a treasure that can be found, however if the person who enters does not find it, they will be trapped inside forever. Only a "chosen one" with the "courage and imagination to enter" would actually be able to use the coin. Skooter decides to take the risk and enters.

While the game was nothing more than a sub-par platformer for the NES, what made it unique was a contest that was held which involved playing the game to completion within a short span of time to win a prize. In December 1991, Treasure Master was released. Those who purchased the game were made aware that they had until April 11, 1992 to practice playing, at which time a code (3HDJL9DNQV2WYTV4S91RXR86) would be revealed on MTV (or through the phone number 1-900-370-TREASURE) that would allow you entrance into an additional level. Completing the entire game, including the new level, would get you another code, generated using a number of variables including the game's serial number. Calling the number 1-900-370-UWIN within 12 hours and reading off a correct code would net you an actual prize.

The first person to call in with a winning code received a choice of four prizes:

The next 250 callers with a valid code would win a Super Nintendo. After that, 36,000 people would receive a "poster-sized Treasure Master certificate."

Treasure Master is still looked upon as a poor NES platformer, but internet communities have formed with the intentions of discovering secrets within the game. Groups on sites such as Reddit have focused their attention on finding out how the winning codes were generated. A programmer on the game, Stephen Ruddy, revealed the complex formula to creating the codes, along with a tease that a second "prize level" was created with the intentions that another code would be revealed to get into it, however never was. A year later, a member of the Treasure Master subreddit was able to discover the new content. The page has not been active since 2010. 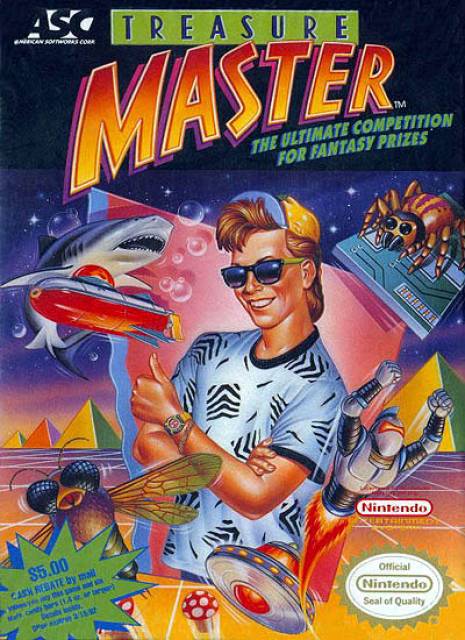