Puzzle Quest: Challenge of the Warlords

Combining the addictive casual gameplay of puzzle game Bejeweled with a fantasy role-playing game, Puzzle Quest was an unexpected hit on every platform it touched.

Released by D3 for a cavalcade of platforms, Puzzle Quest combines the role-playing elements of your standard fantasy RPG with the accessible match-based puzzling of Bejeweled. Players create a character from one of several classes, set that character's base attributes and special abilities, and then set out on a quest to save the land of Etheria from the necromantic forces of Lord Bane. Depending on which character class they choose, they'll be able to use a different range of skill sets during gameplay, and have access to a wide range of abilities and items which will greatly augment their effectiveness in battle.

Exploration is handled on an overworld map, with the player moving between predefined locations like cities, temples, caves, and dungeons. Enemy icons

will appear on the paths between different locations, and when the player wants to travel along that pathway, the enemy must be defeated first. Battles play out much like Bejeweled. The board is an 8x8 grid composed mostly of colorful stones, with one color representing each of the four elements. Additionally, the player will encounter skulls which deal damage when cleared, gold to purchase items, and purple stones which provide experience points.

Players and opponents use a turn-based system to swap the position of these various tiles to produce a row or column of three or more, and thereby enact an effect on one or both combatants. As players build up a large store of elemental mana, they can use their turns to cast a spell or use a special ability, which can do anything from inflict damage to place status effects on both the player and their opponent. The player can learn new abilities throughout the game by capturing monsters, and new equipment like swords and armor will also provide offensive and defensive bonuses that come in handy during combat.

Revenge of the Plague Lord

An expansion pack entitled " Puzzle Quest: Revenge of the Plague Lord" arrived on the Xbox Live Marketplace on July 23, 2008 for the price of 700 MS Points. The expansion pack adds new classes, spells, quests, and magical items. The original game is needed to play this expansion pack.

At the beginning of each campaign, you have the ability to choose what class you play. They each have a unique play style that changes the way you play the game.

While not a skilled fighter, Druids specialize in board manipulation and minor spell casting. Yellow and green mana are the basis of most Druid spells.

The Knight class specializes in using the stars for healing or extra experience points. They also have a variety of damage spells as well. Red and green mana are used for most Knight spells.

Warriors primarily focus on dealing direct damage, they are not especially skilled at any spell casting. Red mana is vital to using most of the Warrior's abilities.

Wizards excel at spell casting, they can deal a lot of damage and maintain a good defence. Red and yellow mana are vital components of the Wizard's arsenal. 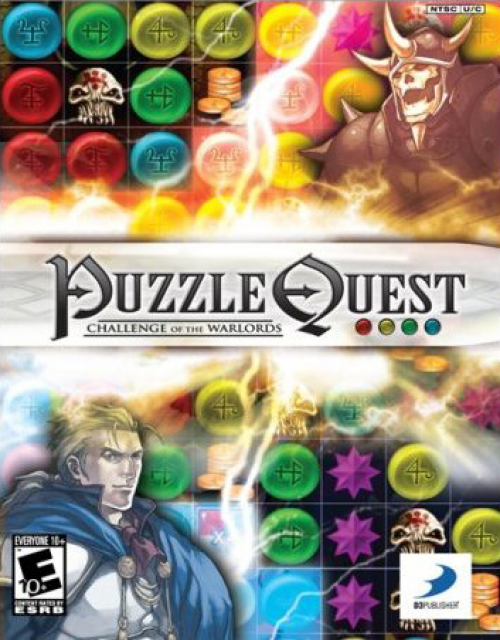