A side-scrolling Arcade shooter with an overdose of the strange and cute. The third game in the Parodius series. Alternatively known as Fantastic Journey.

Gokujou Parodius ("Fantastic Parodius") is a game based of the foundations of the Gradius franchise. In Gradius the enemies are mostly aliens or alien spaceships. In Gokujou Parodius the enemies are Maoi heads, bald eagles, bunnies, bunny-girls, giant strippers, and octopuses. The power-up system is also present in Gokujou Parodius but is character specific. Characters also have their own weapons like missiles, lasers, shields, or options. Each stage opens with the player character flying through space before they enter the stage.

Gokujou Parodius was originally released in the Arcade in both Japan and Europe (where it is known as Fantastic Journey). It was ported to the Super Famicom later the same year. It would also appear on mobile devices and in the Parodius compilations Gokujou Parodius Da! Deluxe Pack for the Sega Saturn and Sony PlayStation released in 1995 and Parodius Portable for the PSP released in 2007.

The player can select from the following characters. The second player takes the "partner" character, who are usually palette swaps:

The last three pairs are exclusive to the Super Famicom version of the game. They are all from games previously released on Nintendo platforms. 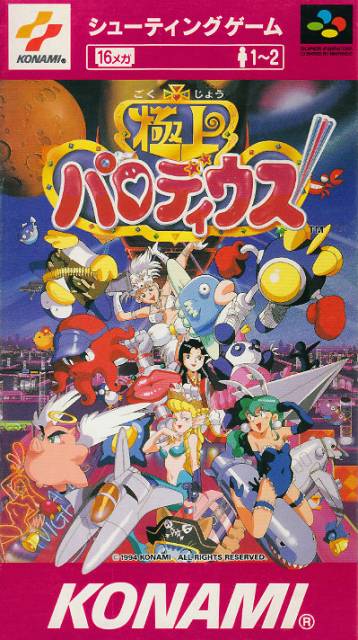