Take control of an elite squad of Clone Troopers and complete the tactical, behind-the-scenes dirty work of the Republic in their fight against the Separatist forces.

Star Wars: Republic Commando is a sci-fi fantasy first-person shooter developed and published by LucasArts for the Xbox (on February 28, 2005) and PC (on March 1, 2005).

Set in the Star Wars universe during the Clone Wars era, players control the leader of an elite four-man Clone Trooper squad (known as "Delta Squad") as they use their advanced tactics and specialized training to aid the Galactic Republic in their fight against Separatist forces. Unlike other games in the Star Wars series, Republic Commando uses a grittier, militaristic tone.

The game features a simplistic context-sensitive squad command system, where players can issue orders to their squadmates (the by-the-books "Fixer", the sadistic "Sev", and the comic relief "Scorch") at a distance with only minimal button presses. Along with changing formation and taking up suppressive positions (sniper spots, grenadier spots, and turrets), players can optionally request squadmates to plant demolition charges, hack consoles, and breach doors (silent or loud).

While the game does not have co-operative multiplayer, it does have standard arena-based multiplayer with support for 16-player matches. This mode's gameplay differs significantly with the single-player campaign (including faster movement, no tactical support, and a two-weapon system similar to Halo: Combat Evolved). As the game is built on Unreal Engine 2, the game's multiplayer shares many similarities with Unreal Tournament 2003.

The game received multiple tie-in novels and comic books, as well as a mobile spin-off.

Delta Squad is comprised of four members, all of them clones designated by a number preceded by the letters RC (Republic Commando). They are identified in-game by the color tones in their armor and the color of their waypoint. While each squad member has a different area of specialty in lore, they're all trained to carry out any order in the same capacity.

Each member of the squad was trained by Mandalorian sergeant Walon Vau and carry specialized equipment, including their standard weapon: DC-17m Interchangeable Weapon System (an upgraded blaster rifle that can be reconfigured for multiple purposes using different attachments).

Formally known as RC-1138, Boss is the player character and the squad's sergeant. His armor has distinct orange marking.

Known for being gifted among his brothers, Boss tends to keep banter to a minimum (reserving voice comms for giving orders to his squad).

He is voiced by actor Temuera Morrison, who portrayed Jango Fett in the film Star Wars: Episode II - Attack of the Clones.

Formally known as RC-1140, Fixer is the squad's technical expert. His armor has a distinct green marking.

Although he received his nickname due to his tendency to solve problems, Fixer only refers to himself and other clones by their designation. Professional and by-the-books, he tends to avoid banter (often chastising Scorch and Sev for doing so).

He is voiced by Andrew Chaikin, who also voices the squad's handler (the "Clone Advisor").

Formally known as RC-1207, Sev is the squad's marksman. His armor has a distinct red marking.

Receiving his nickname as shorthand for his designation, Sev has a menacing voice and a sadistic sense of humor. He also tends to quip on Scorch constantly.

He is voiced by voice actor Jonathan Cook.

Formally known as RC-1262, Scorch is the squad's demolitions expert. His armor has distinct yellow marking.

Receiving his nickname after an accident involving explosive ordinance (leaving him without eyebrows), Scorch has a jovial personality and tends to be the "comic relief" of the squad.

He is voiced by actor Raphael Sbarge, who previously voiced Carth Onasi in both Star Wars: Knights of the Old Republic games.

Each Clone Commando in Delta Squad is assigned two weapons: the DC-17m Interchangeable Weapon System as the primary and the DC-15s Side Arm Blaster as a backup. Throughout the Campaign, players can find additional weapons (only one of which can be carried at a time). Players always have a DC-17m and DC-15s in their possession.

The DC-17m is unique as players can find additional attachments (radically changing their functionality) and can swap them out at any time. Each attachment uses their own ammo.

In Multiplayer, the DC-17m cannot be reconfigured, with each configuration as a separate weapon found in the map. Each player has two weapon slots and start with a DC-17m Blaster and DC-15s (both of which can be swapped out with new weapons).

In addition to fireams, each Commando has a variety of grenades (or "detonators") that are best used against groups of enemies. Each Detonator type has a different purpose

Players can only carry a maximum of 5 of each detonator at a time and can freely swap between them.

During the Republic Commando campaign, the player will meet an array of different enemies, which can be fit into 3 main categories.

The game includes three "campaigns", each of which are done sequentially. Highlighted levels below indicate that they can be accessed in the Campaign Map.

Set in the very beginning of the Clone Wars, the first playable mission involves Delta Squad participating in the Battle of Geonosis.

After making their way to the rendezvous point (while fighting battle droids and Geonosian soldiers), Delta Squad must assassinate Separatist leader Sun Fac, sabotage his droid factory, and infiltrate a disabled Separatist core ship to steal the fleet's launch codes.

Set in day 367 of the Clone Wars, the second playable mission involves Delta Squad investigating the starship RAS Prosecutor, which has mysteriously turned up derelict in the outskirts of Separatist space.

Set in day 785 of the Clone Wars, the third playable mission involves Delta Squad aiding the Wookiees of Kashyyyk in rescuing their leader Tarfful from Trandoshan slavers.

While infiltrating the Trandoshan camp, it is revealed that the Separatists are staging a full-scale invasion of the coastal Wookiee city of Kachirho and Delta Squad are sent to sabotage the efforts (and thus beginning the Battle of Kashyyyk).

The game features traditional arena-based multiplayer with support for matches up to 16 players online/LAN and 4 players split-screen (the latter restricted to the Xbox version only). Team matches pit Republic commandos against Trandoshan mercenaries (with players being able to customize the appearance of both their Clone Commando and their Trandoshan).

This mode has numerous gameplay differences from the single-player campaign:

The music for Star Wars: Republic Commando was written by Jesse Harlin and used to be available for download at the game's official website, when the game still had one. The compositions range from the use of lots of moody segments to the use of plenty of epic awe-inspiring choir themes. 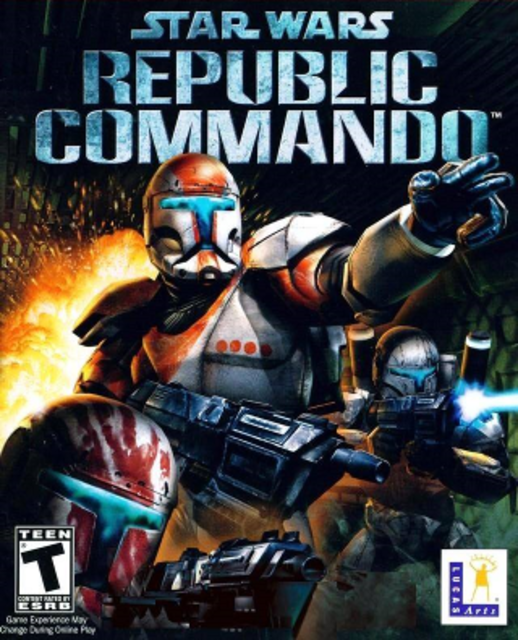