Do whatever you can to win back all of your cars. Explore Los Angeles seamlessly in L.A. Rush. The title was shortened to simply "Rush" on the PSP.
PlayStation Portable PlayStation 2

L.A. Rush is an open-world racing game released on the Xbox, PlayStation 2, and PC , though later appeared on the PSP simply as 'Rush'. The game boasted open world racing mechanics and the city of Los Angeles as its locale. Players take on the role of a 'professional' street racer, who has all of his cars stolen before a major racing tournament. The player is then tasked with hunting down the stolen cars and getting them back before the tournament.

The game features a number of licensed cars as well as fictitious models created by Midway themselves, which regularly boast superior performance. Vehicles in the game are varied, and include such examples as the Oldsmobile Cutlass and Hummer H2. Celebrities also contribute voice acting for the game, such as Orlando Jones and rapper Twista.

L.A. Rush's reception was mixed at best, with some praise and also some complaints about its departure from previous games in the Rush series. Car handing received praise for being similar to other racing games from the same period, such as Need for Speed Underground 2, and Juiced. The car customization was considered the weakest aspect of the package though, as players could not outfit their cars to their own tastes; the customizations were forced upon players when they visited the West Coast Customs shop in the game.

Boxart between the European and American releases of L.A. Rush varied. The US box art features a Mitsubishi Lancer and Chevrolet Camaro crashing through the iconic Hollywood sign, while the European box art focuses more on a modified Hummer H2 that appears in the game, with a yellow color scheme. 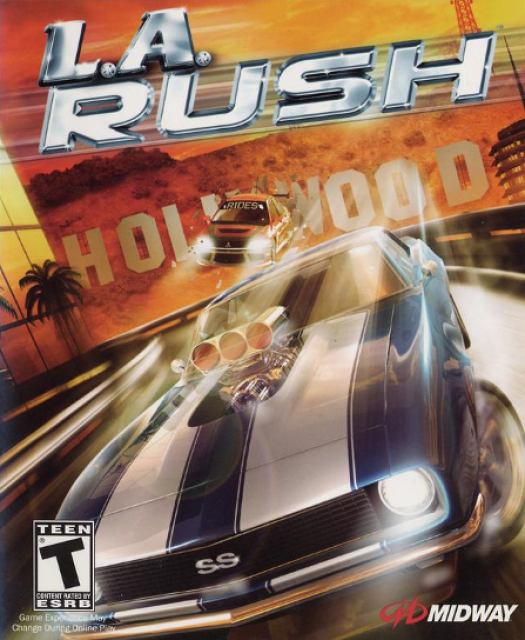