The Granstream Saga is an action RPG released for the PlayStation in 1997 and is the final game developed by Quintet. It was one of the first RPGs with fully 3D polygon graphics and featured third-person real-time combat. The plot, set on floating continents, utilized anime cutscenes.

The Granstream Saga is an action RPG created by developer Shade for the Sony PlayStation.

It was one of the first RPGs to use fully 3D polygon graphics. In contrast to Final Fantasy VII's pre-rendered backdrops and Grandia's 2D characters, The Granstream Saga rendered everything in 3D, though the 3D character models lacked face textures.

The game's plot is based on a manga series, Kros.

The main character of the story is Eon, a young man who is eventually tasked to save the world by finding a way to keep the world's four floating continents from falling into the ocean. Eon wears the "scepter," a jewel on his hand with a variety of utilitarian magics, including the ability to restore destroyed objects to their original state and "store" equipment until Eon enters a fight.

As Eon progresses through his quest, he encounters allies intent on helping him accomplish his goal, particularly Arcia and Laramee, as well as the remnants of an ancient empire believed to have caused the calamity in the first place. But the situation is not as cut and dry as it appears to be, and Eon will learn, before his journey is over, that he has more of a hand in matters of fate than he believes...

The plot gradually becomes darker, with several major plot revelations towards the end of the story, as Eon uncovers the truth about his own dark past. It has two possible endings depending on a difficult moral decision Eon is eventually forced to make.

The Granstream Saga features real-time combat and is initiated by touching a wandering enemy whilst in a dungeon. Combat is viewed from a third-person, behind-the-character perspective, and is a one-on-one duel between Eon and a single enemy. Enemies fight in a variety of ways, from fast opponents that are easy to stun but hard to catch, to lumbering brutes who don't get stunned and must be fought using Eon's superior agility. Unlike other games in the genre, killing enemies does not grant the player XP points, due to the main character leveling up only in predetermined plot points in the campaign. 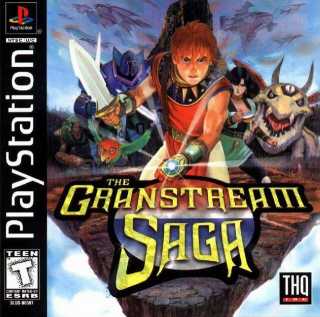